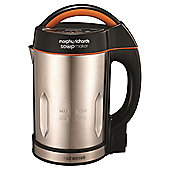 I recently had a chat with a friend and she was raving about her soup maker! She is doing Slimming World and raving abour Syn free soups... another friend piped up - yeah arent they great... I use this... and throw that... into the machine and off it goes.

I often make soup on the hob, so wondered whether it reall was worth investing in a machine... Well, let me tell you YES it is. Where on the hob, you have to worry about it sticking to the pan, over boiling. reducing to a simmer, then wazzing up boiling hot liquid with the risk to melting your skin off with flying splatter.... a soup maker reduces the risk completely.

It really is as simple as chopping the ingredients, making up the stock and choosing, smooth or chunky!

The only issues i have is that my machine cannot be submersed in water and you sort of have to clean under a tap without dipping the plug socket end under water. Ideally, I'd like to dishwash the container and the blades.

Some of the recipes I have tried end up with more liquid and ingredients than the machine can cope with and it refuses to switch on. This is easy to get over as I just calculate the liquid in the recipe and scale down - hey presto !

Saying all that - I love my soup maked and it was probably the cheapest on the market as a big investment for a gadget to sit in the cupboard would be frowned upon by the other half (IYKWIM),

So, today is the day, when I need to dig down deep in perseverance and into my...
32730
Prev Next

All items are hand made and are unique.

We ship FREE anywhere in the UK. All items should be shipped within 24 hours and will arrive via Royal Mail.

Payment can be made at checkout by adding the items to the basket. You will transferred to PayPal where you can use your PayPal account or choose to pay by debit or credit card.

Cant find what you want? Or want a variation on what you can see?

I am more than happy to create you an item to meet your needs, whether it is for your wedding, prom, high school reunion to match your dress or outfit. Simply email me with your vision, I'll create your jewellery at no charge, send you an email with photos and you then can decide whether to buy it or not! - no obligation to buy!

Please email me for any information and enquiries.

These are so useful if you want to track the amount of activity you do and calories...
13766

Easy Peasy Bunting Instructions Use the template and cut along the straight...
9755

Mum of 4... just entered my 40s, having a moderate midlife crisis and in need of inspiration and direction! Join me on my journey - I shall share what I wear, the crafts I do with/out the kids and the recipes.